“When to book a band for your wedding” has been one of the most frequently addressed topics by wedding publications over the last several years. However every time we come across such a wedding resource, we’re surprised to see most articles simply get it wrong. And while we hate to throw anyone under the bus, it pains us to speak with families we’re unable to help because our entire roster of bands is booked for their date.

Recently, we were forced to inform a bride that we had no bands available for a Saturday in September 2015. Dismayed, she replied that all the books she consulted suggested beginning the booking process six months prior to her date. Sadly, this isn’t surprising to hear given wedding authorities such as Martha Stewart Weddings publish this kind of advice:

“Begin your search at least six months before the wedding day by deciding which musical direction best suits the tone and atmosphere of the reception you are planning.”

While this can be true in some instances, roughly six months is hardly the industry standard anymore, and generally isn’t nearly enough time. We already have a handful of 2015 dates for which our entire selection of bands is booked. So when someone asks us “how far advance should we book our band,” the best advice we can give is always, “as soon as you are able.”

One of our brides Sabrina recently gave this same advice when her wedding (at which Splash! performed) was featured on Brides.com:

“Book the bigger things, like the venue or photographer or band, that you want as quickly as possible,” she says. “There’s nothing worse than finding out that the vendor you fell in love with is already booked! Then relax and take your time figuring out the smaller details.” 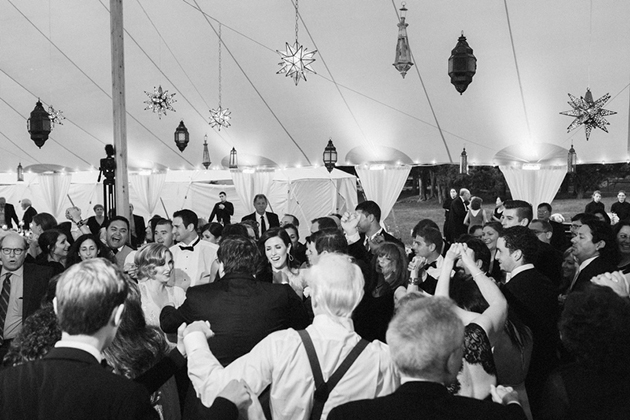 Brides.com is more on par in a post by top party band leader Andy Kushner. Andy says, “Popular bands may be booked as many as 12 to 18 months in advance, so begin your search as early as possible.” Like many Wilson Stevens bands, Andy’s band has performed at numerous high-profile events. He  knows the level of demand  and competition that comes along with highly reputed performers.

On more than one occasion, we’ve worked with a Mother or Father of the Bride who’s daughter wasn’t even engaged yet! Their daughter’s soon-to-be fiancé had sought permission to propose from the parents and they didn’t waste any time getting a jump start on researching and reserving the best band for the couple.

There are of course exceptions, so don’t get discouraged just yet. Peak wedding season generally falls between April and October. So if you’re planning a wedding outside of those months you may have more flexibility with your timeline. And of course, there are always great bands that fall through the cracks for prime dates.

When asked, our Facebook fans have said they booked their bands anywhere from 7 to 23 months: 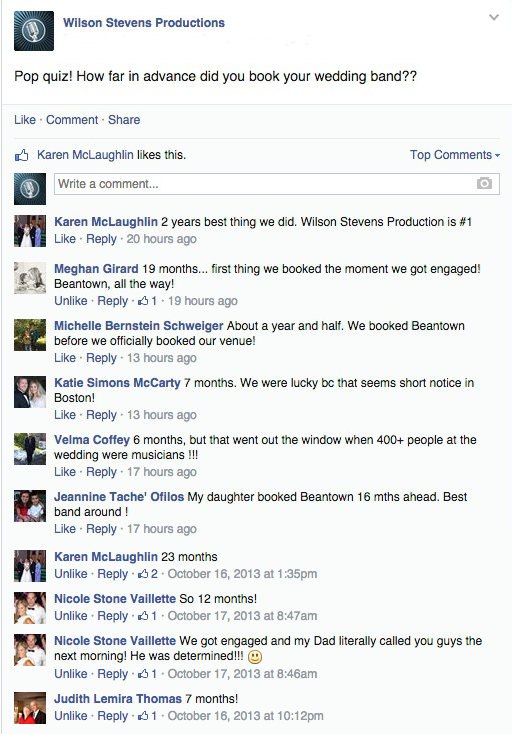 When it comes down to it, there’s no way of knowing if your dream band is already booked without asking. Just today a client reached out saying, “We have not set a date yet because we want to make sure we have good music first. What Saturdays are available?” The sooner you reach out  to verify availability, the better informed you’ll be. And the sooner you can get comfortable with making a decision, the better your chances of securing your first choice. But that’s a post for another day ;-).