In 1974, Stephen Spielberg began filming a little movie called Jaws on Martha’s Vineyard in Massachusetts. The rest, as they say, is history. After almost 40 years, Cape Cod residents, and movie-goers in general, have loosened up on the film’s “don’t go in the water” mantra, partly thanks to 30 years of CGI advancements rendering the mechanical shark not-so-menacing after all. But Cape Cod hasn’t seen the last of the Great White, and Chatham, MA in particular has seen its share of sharks this past summer. Just this past Tuesday a 15-foot Great White was spotted feeding in Boothbay Harbor. Maybe he was stocking up on snacks for the start of Shark Week 2013 on Monday, but we think he was headed to Chatham to attend the Chatham Sharks Gala at Chatham Bars Inn. 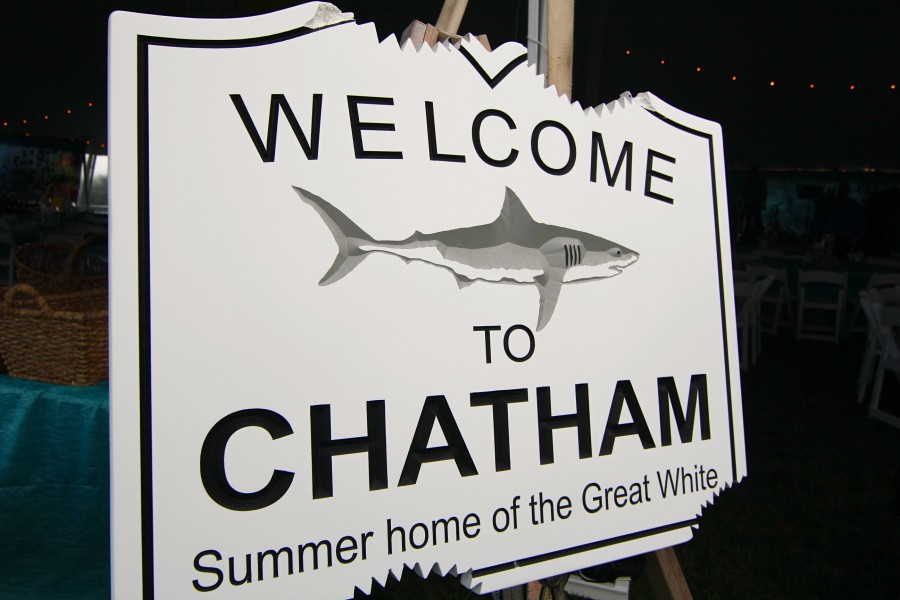 Who could blame him, with members of EYE2EYE performing and a silent auction of Sharks in the Park artwork, all washed down with CBI’s signature “sharktail?” Sharks in the Park creates a unique experience for Chatham residents by combining public art with the local business community. Conceived and sponsored by local artists and businesses, the 56 shark sculptures auctioned off were much more approachable (not to mention more beautiful!) than Jaws‘ original star. Check out just a few of our favorites in the gallery below! One bidder won a trip aboard the research vessel piloted by OCEARCH, a nonprofit shark research organization that partnered with Massachusetts Division of Marine Fisheries and Woods Hole Oceanographic Institution after the noticeable spike in Cape Cod shark sightings earlier this season.

The net proceeds from the Chatham Sharks Gala are being donated by the Chatham Merchants Association as the seed money to the newly established, nonprofit Foundation, to create a Chatham Shark & Marine Life Center. Located right in Chatham, the “Shark Center” will provide a window to Cape Cod’s coastal community. By bringing together marine scientists, oceanographers and ecologists to study and learn, the Center’s goal is to educate and inspire people of all ages to better understand and appreciate the region’s affinity for wildlife. Now that’s a cause we can sink our teeth into.